Carrie White (Formerly)
Chris Hargensen
Sue Snell is much warmer, kinder, and more compassionate in this version of Carrie than her earlier counterparts. She becomes a protagonist. She was portrayed by Gabriella Wilde.

Oddly, when Sue feels pain in her stomach in the alternative ending, her eyes look different and Sue looks like she is being portrayed by a different actress at the end. However, it switches back to Gabriella Wilde having the baby.

Sue is first seen in the swimming pool, playing volleyball with the rest of her class including The Mortimer Snerds and her best friend Chris Hargensen. When Carrie got the chance to play, she accidentally hit Sue in the head. Instead of getting mad about it, Sue just laughed it off. At the shower, she participated in the tampon-throwing incident, though hesitated and stopped, because she felt guilty of what she was doing. When Miss Desjardin slapped the hysterical Carrie, Sue approached her and told her that Carrie probably didn't know, what was happening to her. Sue first showed her sorrow for Carrie after she made love with Tommy and told him how guilty she was. Since Sue felt guilty of what she did, she asked Tommy to take Carrie to Prom. While she herself seemed reluctant, she was willing to let Carrie find happiness and enjoy the prom. While preparing the gym for Prom, Sue felt sick and vomited in the toilet which is not shown on-screen, implying she was pregnant with Tommy's baby. On Prom Night, Sue stayed home with her family. Tommy texts her saying "All's well, she is doing great." After showering, she received a text from Chris saying: "Your girl looks good, but not for long." This alerted Sue that Chris was going to do something to Carrie, and Sue rushed to the gym where she noticed the bucket to be dropped on Carrie by Chris and Billy. She tried to warn Miss Desjardin, but she was forcefully thrown out of the gym, outside. Sue watched in terror as Carrie kills Heather by slamming her into the glass window of the fire exit. She then called 911 and ran and said there was an explosion. After the massacre, Sue watched Miss Desjardin, scared and then walked to Carrie's house. After the disaster at the Prom, Sue went to Carrie's house, where she saw Carrie holding the lifeless corpse of her mother offer to help Carrie, but she refuse. Carrie thought about killing her, but realized that Sue was sorry and was pregnant with a girl, so she pushed her out of the house as a rain of stones destroy Carrie's house, thus saving Sue's life. Sue is later seen at a courtroom, where she tried to defend her testimony of The Black Prom. There, she places the blame for this disaster on everyone, including herself. The scene cuts to a cemetery, where Sue is seen carrying a white rose. This scene plays out similarly to the 1976 film's ending. Sue placed the rose on Carrie's gravestone, vandalized with the words: "Carrie White burns in HELL!" As Sue leaves, the gravestone cracks and breaks while Carrie's scream is heard in the background, indicating that Carrie might still be alive. It is also implied that Sue has broken with the school and her comrades and is the only one who comes out of this relatively unscathed.

In the alternative ending, Sue is seen walking to the graveyard much like the other ending, and feels pain in her stomach. The camera goes to Sue screaming in pain while doctors try to calm her down because she is having her baby. However, instead of a baby, Carrie's bloody hand emerges and grabs Sue's hand. Sue wakes up screaming in terror in her mother's arms and she tries to calm her down. There is a millisecond of Carrie holding Sue's baby, but then it quickly switches back to Sue. It turned out to be all a dream, and Sue just woke up in her mother’s arms crying scared, and will remember it for life.

Many viewers were upset because of this alternate ending, as quoted, "A ripoff ending of the original." However, other viewers thought it was a more scarier and disturbing feel to it. 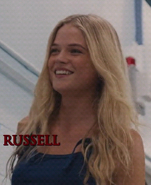 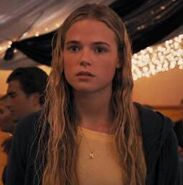