Nicki and Lizzy Watson are a pair of narcissistic twin sisters and members of the Ultras. They serve as the secondary antagonists in Carrie and are portrayed by Karissa and Katie Strain.

The Twins are a part of Chris' clique of friends. They are usually seen tormenting Carrie.

They are part of the Detention held by Miss Desjardin. Chris asks them to leave with her, but they ignore and stay behind. When Chris comes into the Gym fussing to the Ultras about Mr. Morton and Miss Desjardin, Heather and Ernest leave. But Nicki, Lizzy and Tina stay behind with their eyes on Sue and Chris argument.

Sue also spots them while decorating for the Prom. They are with Tina looking at the video from the Locker Room.

The Twins later get ready for the Prom with Heather and Tina. They talk about how awful Sue looked and even use each other as mirrors while getting their hair fixed

When Carrie arrives at the Prom, they stare at her. They are part of the prank and help Tina collect and swap the King and Queen ballots. When Carrie begins using her telekinetic powers, she uses it to turn on the sprinklers causing many people to slip and fall. Nicki and Lizzy attempt to flee during this, but Carrie notices them and uses her powers to slam them down to the ground. They attempt to get up, but Carrie uses her powers again to hold them down and people begin trampling them. They eventually die because of it.

In the original script, Nicki and Lizzy aren't confirmed as sisters, just friends. Nicki is based on Norma Watson and plays a more prominent role in the prank. Lizzy is just a minor character Tina keeps nodding to Nicki who, instead of her, is the one who is at the computer and the one who sneaks Chris and Billy in. Nicki plays the video after the prank and Lizzy trips Carrie as she makes her way out of the Prom During the mayhem, Nicki and Lizzy, along with Harry and Greg are crushed by the bleachers, like Jackie was killed in the final script. 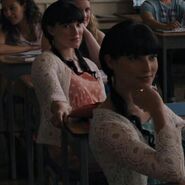 Nicki and Lizzy laughing at Carrie

Nicki and Lizzy attempting to flee

Nicki and Lizzy falling to the floor

Nicki and Lizzy lay on the floor before getting trampled

Nicki and Lizzy attempting to get up

Nicki and Lizzy's death #3
Community content is available under CC-BY-SA unless otherwise noted.