Mr. Morton was the vice-principal of Ewen High School. He's the one who punishes the girls. He also mentors Miss Desjardin because of her being in the high school for only a year. He has been in Ewen High School for twenty years and has a deficiency of remembering names.

He was not at The Black Prom, and his fate afterwards is unknown. However, when Mr. Grayle resigns, he makes no mention of Morton having died or of him needing to be replaced, which makes it almost certain that he did survive.

Mr. Morton was played by the late Stefan Gierasch.

In the 1976 film he plays the principal instead of the vice-principal. During The Black Prom, he was electrocuted to death. 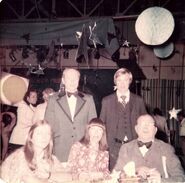 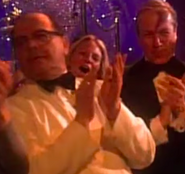 Mr. Morton laughing at Carrie (Seen in her hallucination) 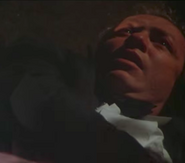 Mr. Morton was played by Laurie Murdoch in the 2002 TV film.

Mr. Morton was the principal of Ewen High School. He had a tendency to call Carrie "Cassie." He supported Miss Desjarden in the punishment regarding the shower incident. When Chris was suspended and out of the prom for refusing to participate in the detention, he stood up to Chris´s father when he fought for the reinstatement of Chris´s prom rights maintaining that punishment on the way. His attempts to prevent the students from panicking after Carrie exposed her telekinetic powers failed.

He was electrocuted at The Black Prom.

Mr. Morton was played by Barry Shabaka Henley in the 2013 remake.

He was the principal of Ewen High School.He has a tendency to forget names. He is a man of hands off policy, who has a tendency to cave in, especially when it comes to people like Chris Hargensen´s father. It is Miss Desjardin who puts up a fight and forces her father to cave in regarding Chris´s punishment. At the prom he didn't do anything regarding Carrie's horrible prank. Later he tried to calm people down after Carrie telekinetic shockwaved everyone, but not avail to.

He probably died The Black Prom, when the students trampled on him intheir quest to get out of the place.

Retrieved from "https://carriemovies.fandom.com/wiki/Mr._Morton?oldid=27976"
Community content is available under CC-BY-SA unless otherwise noted.