Crushed by a basketball goal

Miss Collins is a character in Carrie. She is based on Miss Desjardin from the novel and she is portrayed by Betty Buckley.

Miss Collins is one of the first characters to show kindness towards Carrie by prompting the other girls to pass the ball to her. During the shower scene where Carrie was mistreated, the light bulb bursts (which got broken by Carrie with her powers), while she tended her. Later, she goes with Carrie to the principal and explains what happened. The principal gives the girls a week's detention at her convenience or refusal of their prom tickets and 3 days suspension. Miss Collins tells the girls how upset and angry she is with them. She makes them all do a merciless, week-long, boot camp-style detention to serve as a punishment. When Chris Hargensen refuses to serve out her detention, Miss Collins slaps and fights/argues with her and kicks her out of prom. Later on, Miss Collins sees an upset Carrie and asks her what's wrong and tells her how pretty she is and raises her hopes of finding someone. She finds Sue distrustful about wanting Carrie at prom and tells them off, warning them not to hurt her. At Prom, Miss Collins shares her Prom story with Carrie and the two of them hug. She is later seen at the coronation of the Prom King and Queen. When Miss Collins spots Sue, who tries to warn her about Chris and Billy with the bucket of pig's blood, she ignores her and kicks her out of the gym. When the blood is poured on Carrie, Miss Collins starts to cry in shock, realising her mistake of what she did to Sue . When Carrie imagine's everyone laughing at her, she hallucinates Miss Collins laughing and saying, "Trust me Carrie, you can trust me." As the massacre starts, Miss Collins can be seen trying to revive Tommy with Cora and a few others. She can also be seen grabbing Cora's ears, trying to see if she had anything to do with the prank Chris pulled.

Miss Collins and others try to carry Tommy and find help, but Carrie's telekinesis intercepts the crowd and pins Miss Collins to the side as she screams out for Carrie, begging for her life, but Carrie kills her by slicing her in half with a falling basketball goal post, much to Chris and Billy's shock. 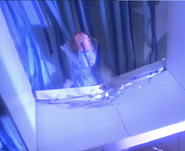 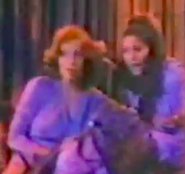 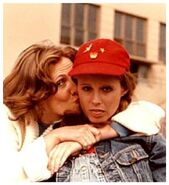 Add a photo to this gallery
Retrieved from "https://carriemovies.fandom.com/wiki/Miss_Collins_(1976)?oldid=31565"
Community content is available under CC-BY-SA unless otherwise noted.