Fell off a table and burned in fire

Helen Shyres is a character from Carrie (1976). She is portrayed by Edie McClurg

She is one of the minor characters and took place on throwing tampons at Carrie, even though she has lines in the film.

Helen was a bully of Carrie, a member of The Mortimer Snerds and the best friend of Sue and Norma. She was present during the shower scene and also at Miss Collins's detention. During the boot camp style detention, Helen is seen making a very wincy face, because of her being in Miss Collins' detention and not in another teacher's detention probably because she is bad at sports.

Helen is than seen getting her hair done for the Prom with Norma and laughing because Carrie is going to the Prom. and she is later seen for a split-second helping Frieda and Sue in the decorations. She attended the Prom only to serve drinks along with Ruth During the prank Helen is very shocked and speechless. Carrie also hallucinates Helen is laughing. When Carrie starts to close the doors with her TK, Helen quickly panics. When the mayhem begins, Helen tries to escape with Ruth, but is unable to and is killed when she is knocked roughly over one of the tables and slamming on the hard ground. Ruth and another guy can be seen attending to her body but it appears to be too late. Her body burns with all the other students as the building crumbles to the ground, as Carrie begins to leave the burning gym. 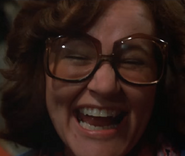 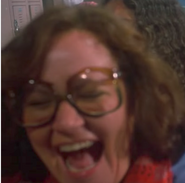 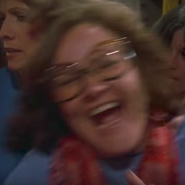 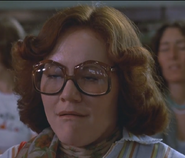 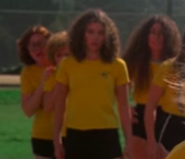 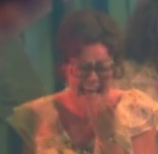 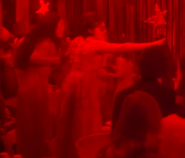 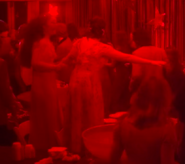 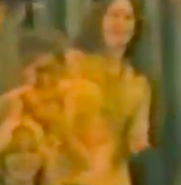 Unused Scene of Helen congratulating Carrie
Add a photo to this gallery
Retrieved from "https://carriemovies.fandom.com/wiki/Helen_Shyres_(1976)?oldid=32657"
Community content is available under CC-BY-SA unless otherwise noted.