Heather Shyres is the tertiary antagonist in Carrie. She is portrayed by Samantha Weinstein.

Heather was a member of the Ultras. She was one of the popular girls who tormented Carrie in the Girls’ Locker Room. Heather also took place in throwing tampons at Carrie, yelling, "Plug it up." She is also seen giving Carrie a pity look because of her crying.

Heather is forced to be in Miss Desjardin's detention because she took part in tormenting Carrie. When Chris asks Heather if she will take part in ditching detention with her, she ignores her and looks away. When Carrie uses her telekinetic powers to break the bathroom mirror, Heather walks in with a normal look, confused and not understanding what just happened. She also notices when Sue isn't feeling well while they are decorating, hinting at Sue's pregnancy.

Heather later gets ready for the prom with Tina and the Watson Twins. Heather is seen getting her hair curled. She also says, "I know Chris isn't coming. She is suspended." to Tina and the Watson Twins. She attends the Prom with Brian Maxwell. At the Prom, Heather helps Tina and the Watson Twins collect the ballots, implying she agrees and helps with the prank. When Sue arrives she asks Heather where Chris is, Heather lies and says she isn't there. When the blood is poured on Carrie and the shower video is shown, she bursts into laughter along with the rest of the Ultras and the students. However, Heather also quickly notices when Carrie's blood begins floating and begins to worry and attempts to flee with Brian, pulling him towards the door. When he refuses to leave, she lets go and continues towards the door.

When Carrie sends her telekinetic shockwave, knocking everyone down, Heather, fearfully, begins running as fast as possible to the exit. Before she can make it out, Carrie throws her across the room and smashes her against the window, which kills her. The window cracks and leaves a bloody spot behind.

Heather stares at Carrie, while she leaves the bathroom, confused about what happened 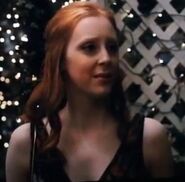 Heather attempting to leave the Prom

Heather hurtling to her death