Bump by panicked students and burned

He is best friends with Tommy and George. He is first seen in Mr. Fromm's class, throwing a paper ball at Norma. Later, he, along with Tommy and George are seen going to the tuxedo shop. He dislikes a tuxedo with ruffles. He was present at the prom. His prom date was Cora Wilson and he was the photographer.

During the disaster, he, Cora and a few other students pick up Tommy's body and attempt to carry it out, but it was too late; when others bumped into them and threw them out of view, presumably burning to death.

The Beak's name on the Prom King and Queen ballot 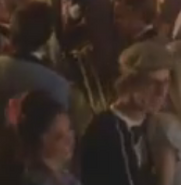 The Beak and the others trying to carry, Tommy's body.