Eric Stark was played by Zachary Ty Bryan in The Rage: Carrie 2.

He was a former student of Bates High School. He was also, apparently, the captain of the Bates football team. Eric was the co-conspirator in a plot to humiliate Rachel Lang because of her involvement in an investigation of the death of her best friend Lisa Parker. His father is Lou Stark.

Eric began dating Lisa Parker as part of a hellish ploy by the footbal team, where they simply slept with "Cute Girls" and then dumped them. Afterwards the jocks put a point value on the girls. After sleeping with Lisa, Eric dumped. A few days later, the girl threw herself from the top of the school building. The next day, Eric talked with Mark Bing about what happened between Lisa and himself. He revealed that Lisa meant nothing to him after being told, Lisa was unable to handle that her relationship with Eric was all for his benefit. Eric then began making every effort to separate himself from Lisa, but his action came too late. Sheriff Kelton began visiting Bates to conduct the investigation into Lisa's death. His search for answers led him from Lisa's old locker to the photo shop, where Rachel worked right to the football field, where Eric spent most of his time. Eric denied ever having seen or spoken to Lisa. However, the sherrif showed Eric a photo of Lisa and himself together. The denial ceased. Later, Eric was faced with statutory rape charges.

Following a meeting with Sue, Rachel appeared at Eric's locker to warn him, that she knows, about what he did to Lisa. Eric then headed directly to Mark to inform him of the developments and that Lisa's friend, Rachel, may be at the heart of it. Mark and Eric then conspired to scare Rachel out of talking with the police. They snuck around outside her foster parents's house, cut the electricity and began to call Rachel on the phone, speaking in a donald duck style voice. But Eric didn't want to play anymore, so he pulled a brass knuckles and prepared to enter the house through a window with the intention to hurt Rachel as a way to additionally intimidate her. Rachel slammed the window on Eric's arm via a reflex telekinetic burst. Soon, Rachel's foster parent's returned and Eric and company ran away. Days later, the home opener for the Bates Bulldogs football team was less than Eric had hoped for. He committed a flagrant foul in the early minutes of the game and was ejected. It got worse, when the Kings University recruiter arrived. After the game the recruiter visited Jesse at his locker to speak with him. That night, at an afterparty held at Mark's parents's summer house, Eric and Mark waited for another friend of theirs, Monica, to bring Rachel to the party. Mark told Eric to hide until he was called. When Mark, Monica and Brad had begun to disgrace Rachel, Eric was called down from hiding. There, he admitted to what Rachel knew all along Eric and the others were only out to steal away the virginity of the girls, with who they slept. That, as well as a video of both Rachel and Jesse making love to each other, set Rachel over the edge. So, when the summer house started going up in flames around Eric and Mark, neither had a clue, as to what was happening, until Mark observed, that Rachel was causing it. Mark, Monica and Eric ran into a small storehouse, where weapons were kept and arm themselves. They headed for the pool next, but Rachel met them there only seconds after the trio arrived. Eric was later killed following a chain reaction involving Monica's glasses being destroyed and put into her eyes and a following bad aim from her spear gun, whose spear then did hit him. 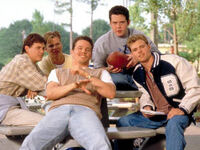 Add a photo to this gallery
Retrieved from "https://carriemovies.fandom.com/wiki/Eric_Stark_(The_Rage)?oldid=30622"
Community content is available under CC-BY-SA unless otherwise noted.