Chris Hargensen is one of the two main antagonists (the other being Margaret White) of Carrie.

She is portrayed by Portia Doubleday.

In the 2013 version of the movie, Chris is the head leader of the Ultras, a clique of popular girls. She recorded Carrie panicking over getting her period via Chris' cell phone. While initially trying to help a hysterical Carrie, telling her the reason why she was bleeding and handing her a tampon, Carrie is too frightened to listen and unintentionally covers Chris's hand with menstrual blood. From there, the situation escalates. The girls, mostly led by Chris, start pelting a crying, cowering Carrie with tampons and sanitary napkins. In a deleted scene, Chris tells Carrie, "Wipe that smile off your face" after seeing her smiling at Tommy, which causes her to give Carrie a dirty look. Later, at Chris's house, Chris, Tina, and Billy upload the shower scene on Youtube. The video goes viral. By the next day, everyone in school has seen it. This is most likely how Miss Desjardin found out about it. Chris, along with the rest of the girls who tormented Carrie, is forced to attend Ms. Desjardin's boot-camp-style detention. However, she quickly loses her temper, telling Ms. Desjardin, "Fuck you" and stating, "I'm not gonna run another god-damn/god damn/goddamn inch because Carrie White had her period and was too stupid to know what it was." She refuses to stay in detention and looks for support from her friends, convinced that they did nothing wrong. When none of her friends back her up, Chris feels hurt and betrayed. In an unseen scene, Chris tells her dad that she was banned from the prom due to her bad behavior. Chris and Mr. Hargensen speak with Mr. Morton. Mr. Hargensen tells Chris to give him the phone in order to prove that she didn't post the video, but a furious Chris, knowing that the video was indeed on her phone, refuses to comply and storms out. Later on, Chris and her boyfriend Billy Nolan, along with a group of his friends, go to a farm. Billy tells her to pick a pig that resembles Carrie, stating, "Pig's blood for a pig." They soon select and slaughter a pig. Chris slits the pig's throat and is shown with a spot of blood on her face. As Chris, Billy, and his friends are setting up the bucket, a drop of blood lands on Chris, but she wipes it off with her nail. On the night of the prom, Chris texts Sue saying, "Your girl looks good. She won't for long", which causes Sue to rush over to the school where she sees Billy pull the rope. After Billy pulls the rope & blood pours all over Carrie, Chris laughs with excitement and glee. As Billy tries to take her away (as Chris is laughing too hard to get up herself), Chris yells out, "Freak! Freak!" As she and Billy run out the door, the bucket falls on Tommy's head, which worries her, but Billy pulls her out of the gymnasium. After seeing the massacre from outside the gym, Chris tries to text her father and pleading for him to pick her up. Billy notices this and snaps at her and takes her phone away. They discuss how they're going to escape before attempting to leave. When Carrie, who follows them, unleashes her telekinetic power on the car, Chris' head goes back as Billy goes head-first into the steering wheel, which cracks his nose and kills him. A frightened Chris shakes Billy, not knowing what happened. She tries to get out of the car, but Carrie locks her inside. Carrie attempts to hold Chris with the seatbelt, but Chris pulls it off. As Carrie lifts up the car, Chris looks shocked. The two girls share a final cold stare. As Chris tries to run Carrie over again (uselessly, as she's levitating in the air), Carrie sends the car down the parking lot, which causes Chris to go face-first into the windshield. Chris is shown bleeding with open wounds and glass sticking out of her cheeks. Chris tries to take her head out of the windshield with her hands, shown struggling. She silently begs Carrie to help her, but Carrie refuses. She dies from her injuries immediately afterward. After Chris dies, Carrie causes the car to explode with her and Billy inside it.

Chris telling Carrie to wipe that smile off your face at the pool.

Chris uploading the video of Carrie.

Chris frightened while looking at Carrie. 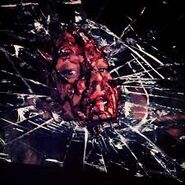