Carrie White is the titular main protagonist-then-turned-tragic-villain of Carrie (2013). She is portrayed by Chloë Grace Moretz

Carrie in this version is more similar to the book, but in more modern terms. At the beginning of the film, Carrie is shown missing the volleyball, while playing pool volleyball. Miss Desjardin, the gym teacher, tells her to hit the ball. Carrie then accidently hits the ball on Sue's head, but Sue laughs it off. After pool volleyball all the girls must go and shower. After a few seconds of showering, Carrie figures out she has her first menstrual cycle in the showers and is harassed by Chris and her clique, while they throw tampons at her, while she pleads for help. Chris also films Carrie with her phone, while the other girls throw tampons and sanitary napkins at Carrie, and Carrie screams and shreaks for them to stop. Miss Desjardin tries to calm Carrie down by slapping her, and a light fixture is unlit by Carrie's power. Carrie is then picked up by her mother Margaret, and is driven home. Before they go inside, Carrie tries to stand up to her mother, saying she doesn't want to go inside with her. After arguing about her mother's twisted words, Margaret hits Carrie in the face with a bible. She then grabs and drags Carrie into the closet to pray, after Carrie shouting to her that she didn't sin, her mother did.

She screams at her mother yelling "HELP, GOD YOU SUCK" and the closet door cracks. Both are shocked. Carrie suspects, that she has telekinesis, some sort of power. She then begins to study everything she can about her power. While practicing at home, the lights flicker and her mother comes up with a knife to check, if she is alright. She quickly, but in control, puts the bed softly on the ground along with books. Margaret then goes on the bed with her, whispering to her that she is safe.

Carrie makes the knife fly off the desk onto the ground, her mother doesn't see it but hears it looking over quickly than looking back at Carrie. Carrie is asked to the prom by Tommy, but thinks it is a trick and runs to the hallway. He follows her and she replies saying "Stop!." He then gives Carrie her coat, as she runs crying. Carrie and Miss Desjardin have a serene and peaceful talk together about Tommy asking her to the prom. She is confronted again while walking home, but this time she accepts. Carrie tries to tell her mother but she is disinterested and attempts to walk away after telling her no. Carrie reveals her power to her mother by lifting up all the furniture and her mother off the floor. She demands that she is going and wants to be normal.

Carrie sews her own dress, and buys makeup, and on prom night, but her mother tries to convince her, that it is a trick and threatens to tell Tommy the truth. Carrie telekinetically pushes her mother into the closet and locks the closet door. She leaves with Tommy and arrives at the prom. She feels amazing, as if her whole life has led to this moment. In the meantime Chris´s friends manipulate the election, so that later she and Tommy win the election and while on stage, Chris drenches Carrie in pig's blood. Carrie is nearly in tears. She reacts with no noise, but gasping. Tommy screams out "What the hell!" The video then plays of Carrie in the shower room pleading for help.

Carrie remembers her mother's words and begins to walk briskly for the door. Before she can take another step she glances over seeing the video humiliated and enraged. Chris, Tina, Nicky and Lizzy laugh hysterically, because the plan worked. As Billy pulls on the rope more, the bucket of blood plummets onto Tommy's head, killing him. Carrie then mourns over his body. After spotting Billy's glasses her inner psyche snaps, as she stands up, flickering the lights. She then levitates the blood on her body, while demonically tranfusing, astonishing the crowd. Heather, scared about what she is seeing, attempts to scram the gym. Her powers, now reaching an incredible level, make sure, that Carrie screeches and unleashes a monstrous tsunami of air, that forces people to the floor, pressurises furniture and obliterates everything. When the storm disappears, Heather's eye is eradicated as Carrie pushes her into the glass on the door right in front of Sue, while another student, trying to scatter, is crushed by a pole. Nicki and Lizzy are forced to the ground telekinetically, while being stampeded by scrambling students, killing them. Carrie then proceeds to turn the sprinklers on, soaking the gym in water. After ripping apart the electrical system, Carrie proceeds to electrocute Tina, pushing her into a fire and setting her ablaze. Not only is Tina set afire, but the whole school begins to collapse under the flames. Carrie then spares Miss Desjardin, throwing her on stage, and electrocuting the water, shocking anyone who stepped in it. Most perish in the fire, and Carrie levitates out of the school. After seeing Chris and Billy, she stalks them.

Eventually she encounters them, who then attempt to kill her by running her over, but she uses her power to stop the car and in the process kills Billy and traps Chris in the car, then sends the car flying into the gas station. Chris goes face-first into the windshield dying of blood-loss and glass sticking out of her cheeks, causing open wounds. She dies because of the wounds. Carrie then blows up the station destroying the car.

Carrie returns home, where she finds, that her mother has escaped the closet and has gotten hold of a kitchen knife in a deleted scene. Carrie strips of her bloody clothes and takes a bath washing off the blood. She changes into her nightgown and meets her mother in the upstairs hall. Her mother tells her of the night she was raped and therefore concevied her. Margaret stabs Carrie in the back but they fly in opposite directions. Carrie then falls down the stairs and brutally hits the wall leaving a blood stain. Her mother manages to slash her leg than arm in the process. She nearly stabs her in the face, so Carrie has no choice but to defend herself. With her last strength she kills her mother by impaling her with the household objects, crucifying her on the way.

After cradling her mother to death, she realizes what she has done, and begins to rain stones begin from the sky. Sue appears shortly afterwards but is held in the grasp of Carrie. After scanning Sue's brain, she realizes that Sue had nothing to do with the prank. She tells Sue that the baby she is pregnant with is a girl before throwing her out, thus saving Sue's life. Carrie´s house then goes into the ground taking Carrie and her dead mother with it, which would indicate, that she was buried alive.

At the end after Sue's words at the White Commission, Sue visits Carrie´s grave and places a white rose on it. Carrie's headstone then cracks, forming a heart before exploding and Carrie screams at the end. This indicates that Carrie's still alive.

In an alternative ending, Sue is screaming in the hospital, but instead of a baby, a bloody hand comes out from her and grabs her arm as she screams in terror in her mother's arms, hinting that it was just a dream after all. There also is a quick millisecond of Carrie holding Sue's baby, which was a hallucination. 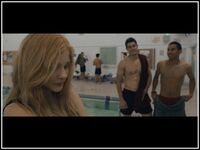 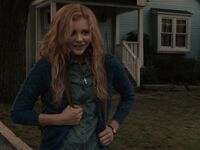 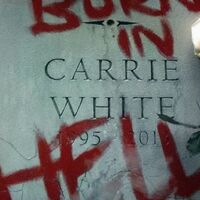