Alive (Believed to be deceased)

Carrietta N. "Carrie" White is the protagonist of the 2002 version. She is portrayed by Angela Bettis. Jodelle Micah Ferland portrayed Young Carrie.

This version of the character was more similar to the novel than Sissy Spacek's portrayal. Throughout much of the movie, there were segments, where different characters gave their accounts of the Ewen High prom night incident. Also, the "downtown destruction" segment, as portrayed in the novel (which was cut from the classic movie because of budget constraints), occurred here. They also showed Carrie as a child talking to Stella Horan and the subsequent Rain of Stones.

In the aftermath of this version, however, Carrie did not die, but survived her post-prom ordeal thanks to Sue and escaped with her to flee to Florida instead after hiding for a while in the school until it was possible after having placed flowers on her mother´s grave. Carrie would had gone on to help others with their ESP, eventually setting the stage for a potential TV series. However, that series was never produced.

The series probably was never produced because of the low ratings of the film.

Carrie after the abuse

Carrie after the second abuse

Carrie's visit to the library 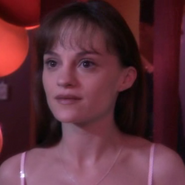 Carrie at the prom

Carrie at the moment of the prank 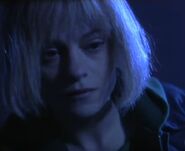 Carrie in one of her dream sequences, disguised

Fleeing with Sue
Add a photo to this gallery
Retrieved from "https://carriemovies.fandom.com/wiki/Carrie_White_(2002)?oldid=30938"
Community content is available under CC-BY-SA unless otherwise noted.