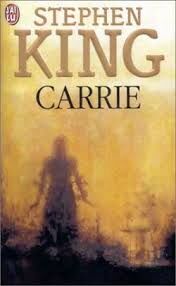 The novel uses fictional documents to frame the story of Carrie White in 1979, a teenager from the city Chamberlain which is in Maine, when she a girl who was neglected and abused by everyone she knew created one of the biggest accomplishments in world history.

For years Carrie has been abused at home by her unstable Christian fundamentalist mother, Margaret. She does not fare much better at Ewen High School. Since first grade, everyone bullied her for her strange, religious ways, her outdated clothing and her unattractive appearance. Carrie was a slightly overweight girl with oily hair and pimples all over her face, back, and buttocks. She continued to be bullied and treated as a social outcast throughout High School. At the beginning of the novel, Carrie has her first period while showering after Gym class. Carrie is terrified, having no concept of menstruation and that her mother never spoke to her about it. The thought that this could be Carrie's first period never occurs to her classmates; instead of sympathizing with the frightened Carrie, they use it as an opportunity to make fun of her, throwing tampons and sanitary napkins at her as well as chanting at her. Gym Teacher Miss Desjardin sees what is going on and immediately tries to help Carrie while the girls sneak away. At first Miss Desjardin is angry at Carrie for freaking out, but soon realizes that Carrie has no idea, what is happening to her and believes she is dying. While Miss Desjardin tries to explain menstruation to Carrie, a light bulb suddenly bursts. Miss Desjardin and Mr. Morton, The Assistant Principal, dismisses Carrie for the rest of the day. Before she leaves, Mr. Morton refers to Carrie as "Cassie." Angrily stating that that is not her name, Mr. Morton's ash tray unexpectedly falls off the desk. On the way home she is molested by a five year old boy in a bicycle named Tommy Erbter. She wished him to fall and it happened. It surprised her. Then she remembered, that something similar had happened, when she was a young girl, when she was mistreated by her mother for having talked to a neighbour she considered a "Slut". Carrie’s mother finds out about the incident in the showers before Carrie reaches home. Referring to menstruation as "The Curse Of Blood", she beats Carrie, forces Carrie on her knees while frantically reciting verses and prayers, and locks Carrie in the closet for hours to pray.

Carrie gradually discovers through these events, that she has telekinetic powers. She tries to keep them under control, even though she is continually pressed to the limit. Meanwhile, Sue Snell, one of the girls who had earlier teased Carrie in the showers, feels bad for her participation in the incident. With the prom fast approaching, Sue sets Carrie up with her boyfriend, Tommy Ross, a baseball jock, but also an academic who treats Carrie with respect.

The following school day, Miss Desjardin punishes the girls involved with a week's detention in the school gym (a punishment made by the school's administration wing). However, Chris Hargensen, who helped instigate the episode in the showers, skips detention and she is suspended for three days and banned from the prom (This was Miss Desjardin's original intended punishment, but would be enforced to those who skipped) for it. An attempt by her father to prevent it fails because of the solidity of the decision and because of the fear of a countersuit by the school against Chris for her behaviour towards Carrie, which would show, what a buly Chris actually is. As revenge, she and her boyfriend, Billy Nolan, a hardcore thug, hatch a plan to humiliate Carrie in front of the entire school with the help of friends. Chris, Billy and their friends raid a pig farm at night, kill two pigs, get the blood out of them and fill two buckets with it. Then theyrig them over the stage on a rafter hidden out of sight with the intention to spill it on Tommy and Carrie.

During dinner, Carrie informs her mother that she has been invited to the prom by Tommy and that she has accepted his invitation. Margaret refuses for her to go, slaps her daughter, and orders her to go to the closet. When Carrie refuses, Margaret attempts to hit Carrie again, but Carrie stops Margaret’s hand and overturns a few dishes with her powers. Standing up for herself, Carrie tells her mother that she is going and that she wants to live her own life.

On prom night, earlier in the day, Carrie is trying on her dress she made for the prom. Carrie is tormented by her mother begging for her not to leave the house. Margaret begs her to burn the dress and do penance, but Carrie refuses. Margaret then starts to hurt herself in order to get Carrie to change her mind. Carrie once again does not budge, and with her powers sends her mother out of her room. After this Margaret goes out of the house. Later that night, Carrie picked up by Tommy and they arrive at the prom. Carrie is nervous at first, but everyone begins treating her equally. Soon Carrie begins enjoying herself and Tommy begins to become attracted to her. Meanwhile, Sue continually worries about what's happening at the prom — and at the same time worries, if she's pregnant.

Carrie and Tommy are voted for King and Queen, after Chris and her friends set it up. Once on stage, Chris drenches Carrie and Tommy with the pig blood. Everyone begins pointing and laughing, even members of the staff, including Miss Desjardin. A bucket also knocks Tommy unconscious, probably even killing him and Carrie runs because of this out of the gym. Miss Desjardin approaches her, but Carrie slams he to the wall. She is then tripped, which causes the crowd to laugh even more, but she gets back up and rushes outside. Contemplating her life in solitary confinement, she remembers her power and goes back to exact revenge on everyone, who tormented her all of her life. She locks the doors and turns on the sprinkler system. But after viewing two kids die of electrocution, her mind finally snaps and she begins to intentionally harm the others, exacting her revenge by setting fire to the gym. She leaves the prom-goers and chaperones to die in the fire. Miss Desjardin and a few other students manage to survive the destruction by fleeing through the fire doors in time. Carrie then leaves the school and begins to destroy Chamberlain, blowing up a gas station, downtown and setting her entire neighborhood on fire. She also destroys the town's fire hydrants, preventing any attempt at putting out the fires for a long time. She also telepathically informs any town residents within a certain radius of the destruction, that she is the one causing it, whether they know, who she is or not. Notably, Carrie goes to a cathedral, where she prays, all the while manipulating a series of power lines outside, killing several civilians surveying the event. Sue rushes to the school and watches it explode, which also  destroys a portion of the town.

Carrie makes her way home and confronts her mother, who has now gone completely mad. Her mother tells Carrie of the night she was raped by Carrie's equally religious father (while drunk) and conceived her, stating she truly enjoyed the rape, before stabbing Carrie in the shoulder with a carving knife. In retaliation, Carrie kills her mother by stopping her heart. Mortally wounded, Carrie then makes her way to the local roadhouse, where her father got drunk and raped her mother the night she was conceived. Chris and Billy, who happened to be having sex inside, receive word from Billy's friend Jackie of what has happened to Chamberlain, and Billy plans on leaving town. Chris and Billy exit the roadhouse, just as Carrie arrives, and attempt to run her down with Billy's car, but Carrie telekinetically sends the car crashing into the roadhouse, killing Chris and Billy and destroying the roadhouse on the way killing everyone inside it. Carrie then collapses in the parking lot from blood loss.

Sue has been searching for Carrie since the disaster began and fnally finds her near the roadhouse by following the trail of blood from Margaret´s house. She finds Carrie in the parking lot surrounded by blood and talks with Carrie telepathically after moving her body with the face towards the sky. Carrie blames her for the prank. However, after scanning Sue's brain, she finds out that Sue had no idea of the prank and that she had set her up with Tommy to apologize for the gym shower incident. Carrie believes her and forgives Sue, but transfers all of her life to Sue and then cries out for her mother before dying from the stab wound in Sue's arms. Sue also experiences, momentarily, what happens, when someone dies in his mind. Terror-stricken, Sue runs away from the roadhouse and, after distancing herself from it, she screams and has her period, meaning that she miscarried if pregnant.

Carrie´s body was later taken away by the authorities after being identified by Sue and taken to the White Commission, who studied it. They found anomalies in her brain, which might explain her telelekinetic abilities.

A month later Chamberlain is now basically a ghost town. A very great part of Chamberlain is destroyed. 458 people died because of the disaster, 99 of them were at the Junior-Senior Prom and 67 of them were Seniors. It is the last event, which destroys the town´s will to rebuild. That´s why, after the mass-funerals,  people left, haunted by the destruction, the loss of people. the haunt of the guilt regarding Carrie despite of attempts to vilify her and the fact of being seen as fools and assholes by the rest of the world. The 'Black Prom' incident has hit the nation harder than the assassination of John F. Kennedy. After interviewing the survivors of that night, science actually begins to take telekinesis seriously. Miss Desjardin, consumed with guilt over Carrie, resigns from teaching. Henry Grayle, the school principal, also resigns. Sue writes a memoir of her experience entitled My Name is Susan Snell, which warns the reader not to forget about the events that took place in Chamberlain, lest something like it happens again. It is implied, that she is also broken to the core because of the events and its aftermath, when the White Commission tries to turn her into a scapegoat for what happened. She has also begun embracing death because of it and because of the telepathic experience of Carrie´s death. It is also implied, that Chamberlain has since been reduced to a simple tourist attraction for those, who want to know more about Carrie White and her rampage.

The book closes with a letter written by a woman in Tennessee, where, it is implied, her daughter, like Carrie White, is developing telekinetic powers.

The audiobook version of Carrie is read by Sissy Spacek, who played the part of Carrie in the first film adaptation.

The story was adapted into a film in 1976, a musical in 1988, and was remade for television in 2002. Another film remake was developed, starring Chloe Mortez of Kick Ass to star as Carrie. Julianna Moore played in this new remake Margaret. It was released on October 18, 2013.

Carrie was read by the Others' book club on Lost in September of 2004.

Book Cover 4
Add a photo to this gallery
Retrieved from "https://carriemovies.fandom.com/wiki/Carrie_(Novel)?oldid=29502"
Community content is available under CC-BY-SA unless otherwise noted.