Start a Wiki
Carrie (2013) is the fourth film in the franchise and the third adaption of the novel. It was directed by Kimberly Pierce. The film was scheduled to be released on March 15, 2013, but was later moved to October 18, 2013. The film is also the first co-production between MGM and Screen Gems.

Carrie White (Chloë Grace Moretz) is a girl in her last three months of her senior year at Ewen High School in Chamberlain, Maine.

One day while showering after gym class, Carrie has her very first menstrual period. Knowing nothing of menstruation, she thinks she's bleeding to death. The other girls laugh at Carrie and tease her by throwing tampons and feminine napkins at her. One of the girls, Chris Hargensen (Portia Doubleday) records the event on her phone and later uploads it on YouTube. The gym teacher, Miss Desjardin (Judy Greer), comforts Carrie and takes her to the principal’s office where Mr. Morton (Barry Henley) gives her a dismissal, but when he tells Carrie that he'll have to inform her mother of the event, Carrie becomes frightened and causes the water cooler to suddenly explode. Carrie's deeply religious mother, Margaret (Julianne Moore), is called and picks Carrie up from school early. While sitting in the car, a young neighborhood boy named Tommy Erbter (Tyler Rushton) begins taunting Carrie, by chanting "Crazy Carrie". Tommy is suddenly pushed off of his bike and runs away in fear, which surprises Carrie. Believing Carrie's period to be a "sin", Margaret abuses Carrie and locks her into a closet. As Carrie screams to be let out, she makes a crack in the door. Both Margaret and Carrie are surprised at this and Carrie realizes she definitely has telekinetic powers. The next day, Miss Desjardin informs the girls, who teased Carrie during class, that they will sprint for a very long time as punishment for the bullying. When Chris protests, Miss Desjardin informs her that anyone who doesn't do this will be suspended for three days and banned from the prom. Chris, feeling that she did nothing wrong, stops sprinting and tries to encourage her friends to stop as well, and when all her friends refuse, she vows revenge while Miss Desjardin bans her from the prom and suspends her. When Chris' father John Hargensen, who is a lawyer, threatens to sue the school unless Chris' suspension is rescinded, Miss Desjardin reveals that someone uploaded a video of the shower incident to YouTube most likely Chris. John urges his daughter to hand over her phone to prove her innocence, but Chris storms out of the office. After that, she is officially banned from the prom.

Carrie researches telekinesis and learns how to harness her abilities. Sue Snell (Gabriella Wilde), one of the popular girls that took part in teasing Carrie in the shower room, feels bad about what she did and tries to find a way to make it up to Carrie. Sue asks her athlete boyfriend Tommy Ross (Ansel Elgort) to take Carrie to the prom and show her a good time. When Tommy asks Carrie, she is suspicious at first, but then accepts his invitation. Carrie informs her mother that she has been invited to the prom, but Margaret refuses to permit Carrie to attend. In pleading her mother for permission, Carrie manifests her telekinesis, which Margaret believes must come from "The Devil". Carrie explains that she is not the only one who harbors telekinetic abilities, but Margaret is unmoved, believing that her daughter has been corrupted by sin. Chris, her boyfriend Billy Nolan (Alex Russell), and his friends, Jackie Talbot (Max Topplin) and Kenny Garson (Kyle Mac) slip into a nearby farm, where they kill a pig and drain its blood into a bucket. Chris and Billy then break into the school gym and hoist the bucket to the ceiling. On the night of the prom, Margaret tries to prevent Carrie from going to the prom, but Carrie telekinetically locks her mother in the prayer closet. When she arrives at the prom, Carrie seems to enjoy herself. To the surprise of everyone, Carrie and Tommy are named prom queen and king. This is revealed to be the result of Chris' best friend Tina Blake (Zoë Belkin) slipping fake ballots into the ballot box as part of Chris and Billy's plan. Meanwhile, Sue, who is at home, receives a text from Chris taunting her about her plan of revenge on Carrie. Sue drives to the prom, arriving just as Carrie and Tommy are about to be crowned. She sees that everything is fine, but once she spots the bucket of pig blood dangling over the gym, she tries to warn everyone. Miss Desjardin spots Sue and hustles her out, suspecting that she is planning to humiliate Carrie.

The deleted scenes are only available on Blu-ray.

"Drive To The Pig Farm"

"Tina On Fire (Extended)"
Add a photo to this gallery

"Wip That Smile Off Your Face" 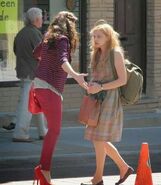 "Chris & Carrie Outside The Dress Shop"

"Chris & Billy Rushing From The School" 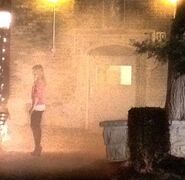 "Sue & Miss Desjarden Outside The School" 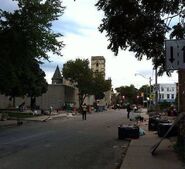 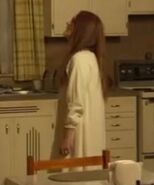 "Margaret Follows Carrie"
Add a photo to this gallery

There is currently a petition online to ensure the extended release of Carrie on DVD and Blu-ray! You can view and sign the petition at http://www.getpetition.com/petitions/carriepetition The studios are listening. 25.000 signatures are needed.

The alternate ending is only available on Blue-ray.

It begins with Sue visiting Carrie's gravestone. That she starts to feel pain in her stomach and screams, believing she is having her baby. She is then taken to the hospital and cries in pain while the doctor tries to take her baby out. For a few seconds of silence, a bloody hand pops out, and grabs her arm. Sue screams in terror and her mother comes to wake her up from the nightmare. Sue than imagines a bloody Carrie holding her baby for a few seconds and continues to scream. Meaning that she's forever scarred because of what happened at the Prom. 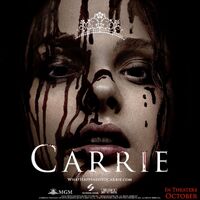 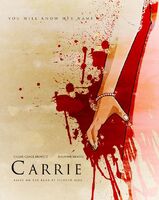 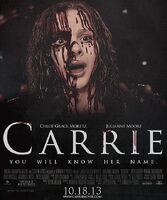 Poster #38
Add a photo to this gallery

Start a Discussion Discussions about Carrie (2013)