Many say it is a remake, but it isn't because it is a far more faithful adaption of the novel but with a twist ending. It included scenes from the novel, such as "The Rain of Stones" and "The Town Destruction." It was supposed to be the pilot for a TV series, but it was cancelled because of the bad and low ratings. Due to the CGI of the film, it was voted the least favorite Carrie adaption. It failed at the box office with a 5.4.

This film was directed by David Carson. It also featured Carrie as a little girl, encountering Estelle Horan, one of the neighbors, whom her mother calls a "slut." In this adaption, her mother was less chaotic, but she still had a crazy essence. Carrie was played by Angela Bettis, who was a very shy and lonely outcast and many said that she did fit the character best.

The story begins, when Carrie is born in Margaret White´s house and later in a police station, where a young girl called Sue Snell is interrogated by Detective John Mulchaey about The Black Prom disaster and the disappearance of Carrie White two weeks before. The story is told in flashbacks. A week before the prom we see Carrie playing baseball during gym. We can see, that she doesn´t play the game well and she is teased because of it. After gym class, in the shower, Carrie has her first period. Not knowing about it, because her mother didn't tell her, she panics. When the other girls find out about it

they all surround her and mercilessly verbally and also physically abuse her. It hurts Carrie so much, that she goes into a fetal position. Miss Dejardin then intervenes and takes care of the situation. Later Carrie and Miss Desjardin enter the principal´s office, where she shows for the first time her telekinetic abilities by moving the principal´s desk five inches in the opposite direction, when she angrily tells the principal, that her name is Carrie after he repeatedly mispronounced it. They give her the day off. After that she becomes the victim of another prank, when the other girls, especially Tina and Chris put tampons in her locker, so that they fall out of it,when she opens it writing on the closet "Plug It Up". Sue Snell, who participated in the shower incident doesn´t like, what she is seeing. On her way home she is bullied by a young boy in a bicycle. Reflexively she uses her telekinesis to push him into a tree, where he falls to the ground. Later, when she reaches her home, she thinks about what she had done and she remembers, how she threw small meteorites

in her own home, when her mother attacked her when she was a child because she talked to a young neighbor about "Dirty Pillows". One of its impacts can still be seen by Carrie in the present when she is about to enter her house. After remembering she enters her home, where her fanatic mother is waiting for her. She received a call from her school and know,s therefore, what happened. In her eye,s she now is a sinner after having become a woman and throws her into a closet for having had her period and therefore being cursed with the original sin ordering her to pray there and make penance. Later Miss Desjardin chastises the girls for the shower incident and the aftermath and punishes them. She gives them detention for a week, fifty minutes every day, where they will have running exercises all the time or they will have three days suspension and refusal of their prom tickets for skipping detention. All bulge because of their wish of going to prom, but Chris, the meanest of them all, doesn´t want to do it and therefore receives the suspension. In the meantime,e Carrie goes to the library and tries to find out, what is going on with her. She finds out, she has telekinesis through research online.

Sue feels bad about what happened, especially after the locker affair, breaks with Chris´s behavior and tries to amend things by convincing Tommy to invite her to the prom. She even helps Carrie prepare for that when she finds her testing a lipstick. Carrie´s mother, however, doesn't want her to go to the prom, but cannot stop her, because in the meantime Carrie has practiced her abilities to the extent of being able to defend herself against her mother and abuser. In the meantime, Chris finds out through Tina, another Carrie hater about the intention of inviting Carrie to the prom with Tommy and decides together with her boyfriend Billy to take revenge on Carrie there. They go with Kenny and Jackie to a pig farm and kill a pig. Then they suck its blood out of it and put it in a bucket. Later they put it above the place, where the Queen is being planned to be crowned during the Prom. The night of the prom begins. Carrie is taken by Tommy to the prom, while Sue stays at home. There she enjoys herself, is even accepted by a few classmates. In the meantime, the election of being prom king and the queen is manipulated by Tina Blake and the others, who also have become part of the prank. The manipulation makes sure, that Carrie is elected Prom Queen together with Tommy. Once Carrie was positioned there, Chris, under the insistence of her boyfriend Billy Nolan, drops the bucket of blood, that was above Carrie upon her. Tommy and the spectators became shocked. Later Tommy was enraged. At that moment Chris did let the bucket fall, so she could flee from the place with Billy. It hit Tommy in the head killing him. At that moment most of the spectators

begin to laugh, especially the conspirators still present putting Carrie in a catatonic state. She loses conscious of her surroundings because of it.

Miss Desjardin tries to wake her up, when a telekinetic wave comes out of her. Then, subconsciously in her rage, still surrounded by darkness, she closes the gymnasium doors and destroys the electrical equipment, setting the gym on fire. She begins moving things around, as mass panic engulfs the gym. As the sprinklers turn on to put out the fire, Carrie floods the gymnasium with water and then throws the score panel on the ground electrocuting all those, who weren´t killed until then. Only Miss Desjardin and a few others survive by escaping through a vent. After that Carrie leaves the gymnasium, which crumbles a few moments later to the ground. After this event

Carrie goes home in the same subconscious state destroying everything in her path, including downtown and a gas station. Sue notices the fires and drives into town. Chris and Billy find out through Jackie what has happened and go to the town, too. There Billy, who rides the car, spots Carrie and tries to run her over. They are killed by Carrie´s telekinetic powers, who crushes the car to a tree, killing them both on the way. She finally reaches home and goes to the bathtub, fills it with water and goes into it with her dress on. It is then when she regains consciousness of her surroundings again. A minute later her mother comes in. Now, completely mad, she tries to drown her. Carrie then kills her by stopping her heart but lingers then between life and death because of the murder attempt. Sue, who recognized Carrie, while she was in the streets, follows her, enters her house and finds her in the bathtub. She takes her out of it and manages to revive her. At that moment Carrie, in her wish to know what has happened, subconsciously and telepathically sends to Sue everything regarding her life. After that, she comes completely back to life and asks consciously what happened. Sue decides to hide her until everything is calmed down. Two weeks after The Black Prom a police task force under the leadership of Detective John Mulchaey questions the survivors of The Black Prom. He manages to reconstruct what happened at the Prom, but cannot find Carrie´s body and still cannot understand what exactly happened after the humiliation of Carrie. Through Miss Desjardin, however, he begins to suspect, that Carrie was responsible for the destruction through unnatural ways. Unknownst to all, Sue is hiding Carrie in what

is left of the school for two weeks. Once everything is calmed down after these two weeks, Sue and Carrie visit the grave of Carrie´s mother at night, so that they will not be seen, where Carrie can see her for the first and last time and say goodbye to her. Then Sue sends her to Florida to start a new life and help other telekinetics. On the way to Florida, Carrie is haunted by visions of her mother and Chris but looks forward to her new life.

It was supposed to be the pilot for a TV Series, but it was never materialized because of the low ratings. 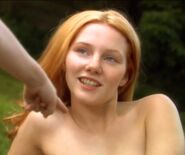 A few differences from the novel